Japan Donated to the Mothers and Children Welfare Society (2019) 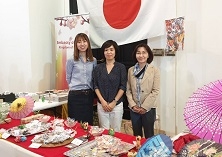 On the 22nd of April 2019, Mrs. Masako Araike, the wife of Deputy Chief of Mission in the Embassy of Japan in the Kingdom of Bahrain, and the wives of Japanese diplomats met H.E. Shaikha Hind bint Salman Al Khalifa, President of the Children and Mothers Welfare Society and handed over as a donation the proceeds of the Japanese booth at the Annual Embassies Bazaar 2010 organized by the Society on the 16th of April 2019. At the Bazaar, the Japanese booth provided Japanese traditional goods such as accessories and tableware and acquired a favorable reputation from participants.