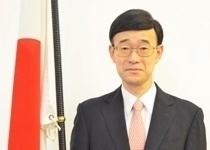 I am Hideki Ito, the newly appointed Ambassador of Japan to the Kingdom of Bahrain. I arrived on March 9, 2018. As a matter of fact, I worked here from 2007 to 2009 .Therefore, this is my second assignment in Bahrain. I have a feeling that high-rise buildings have increased, towns have expanded, and the number of cars on the streets has considerably increased, which has resulted in further traffic congestion, compared to 10 years ago. However, I would like to embark on the new assignment with fresh determination.

Bahrain is a small island country located in the Gulf, but it has a long history. It is believed to be the center of the ancient Dilmun civilization. Dilmun prospered as a trade center linking Mesopotamian and the Indus valley. More recently, oil was discovered for the first time in the Gulf region in 1932 in Bahrain, following Iran (Persia at the time) and Iraq. Two years later, in 1934, the destination of the first Bahraini oil export was Japan. We have that historical relationship. When Bahrain became independent from the UK in 1971, Japan recognized Bahrain as an independent state the following year and in 1983 opened its embassy in Bahrain, while Bahrain opened its embassy in Japan in 2005.

Bilateral relationship has been making a significant progress recently, through mutual visits by leaders and ministers of both countries, such as His Majesty King Hamad’s visit to Japan (April 2012), His Royal Highness Crown Prince Salman’s visit to Japan (March 2013), Prime Minister Mr. Abe's visit to Bahrain (August 2013), and Foreign Minister Mr. Kono’s visit to Bahrain (December 2017). That has led to cooperative relationships and exchanges in various fields.

Cultural exchanges are also vibrant between the tow countries. Mohammed bin Faris Band and Quarari Band performed in 15 cities in Japan from October to November 2017, commemorating the 45th anniversary of the establishment of Japan-Bahrain diplomatic relations and made a great success. In addition, about 100 Bahrainis are learning the Japanese language in Bahrain now and so far more than 30 Bahraini students have studied in universities in Japan under the scholarship program of the Japanese government.

The United States Navy Fifth Fleet Headquarters, which covers the entire Middle East region, is located here and cooperates with various countries in order to ensure safety and stability in the Gulf and near waters. Japan also participates in countermeasures against piracy and international minesweeping training in this region. Since 2015, Japan Maritime Self-Defense Force has sent three commanders to take command of the Combined Task Force 151 (CTF 151), which is responsible for eradicating piracy. Japan will continue contributing to the realization of safe navigation in this region.

Bahrain is a relatively safe and stable nation among the countries in the region, but we would like to provide safety information to Japanese residents as much as possible.

I am determined to do my best to promote further relationship between Japan and Bahrain with the kind support from all of you.